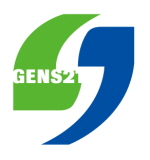 The will of Sangji University to be new, future-oriented, and green, pursue solidarity, unity, and globalization, and be at the center of the world in the 21st century is expressed with the English initials S and J, while its progressiveness and infinite potential as well as the school-student and teacher-student solidarity and harmony and the strong spirit and creative thinking of the members of SJU are expressed in green and blue colors. The symbol mark also conveys the will of the university to emerge as a leader in society in the future in combination with GENS21, the vision of SJU.

Along with the symbol mark, the logotype is the most fundamental component of SJU’s UI system, and it was designed to present the official logo of SJU.